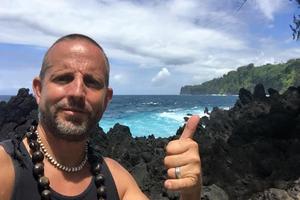 SHADOW HILLS (CBSLA) – A longtime Los Angeles County Public Defender and father of two died over the weekend after contracting what was suspected to be West Nile Virus.
Fifty-three-year-old Robert Johnson of Shadow Hills passed away Saturday following a month-long fight with the viral infection, according to his husband Scott Montgomery. Montgomery told CBS2 by phone Monday that Johnson started suffering flu-like symptoms over Labor Day weekend. About four days later, his fever spiked and he was hospitalized.

“I thought he had a stroke, that’s why I took him to the hospital,” Montgomery said. “Within a week of that he was on life support in a hospital.”

Montgomery said doctors told him Johnson had contracted West Nile Virus. He suffered brain swelling, went into a coma, and then his heart stopped, Montgomery said.

“Scott was a very healthy person, 53-years-old, we hike on weekends, he swam in the swimming pool every weekend, he doesn’t smoke,” Montgomery said.

Symptoms of the WNV — which is transmitted by mosquito bites — can include fever, body aches, rash, nausea, vomiting and headaches, but many people who are infected may not show any symptoms. In rare cases, such as Johnson’s, patients can develop more serious problems, such as brain inflammation or paralysis.

“I don’t know what to say, he loved and took care of everybody,” Montgomery said.

Johnson worked as a public defender who largely represented those facing the death penalty. Last year, he received the 2017 Adult Volunteer of the Year award from L.A. County for his humanitarian work.

“Defending the right of those who have no defenders, that was what was important to Rob,” Montgomery said.

“The best thing we ever did was adopt our boys,” Montgomery said. “He was truly the best dad you could ever have.”

To protect yourself from WNV, wear mosquito repellant containing the active ingredients of DEET, Picaridin or IR3535 if you are spending time outdoors.

You should also replace any standing water around your home, such as pet bowls, at least once a week, because those can serve as a mosquito breeding ground. You should also close all unscreened doors and windows to prevent mosquitoes from entering your home.

A GoFundMe page that was set up to help with Johnson’s medical expenses is now being used for a college fund for his two sons, Chuckie and Gabriel. If you would like to contribute, click here.