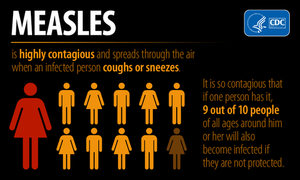 The current measles outbreak in Washington state has tallied the highest number of infections since 1996, an official said Wednesday. The 37 cases there include 36 in Clark County, across the Columbia River from Portland, Oregon, and one case in King County, which includes Seattle; one case in Oregon is linked to the outbreak, Washington Secretary of Health John Wiesman said.

Two patients have been hospitalized.

Hawaii also reported two cases of measles in travelers who were infected in Washington before their visit to the Big Island.
Measles is a contagious virus that spreads through the air via coughing and sneezing. One or two out of every 1,000 children who get measles will die from complications, according to the US Centers for Disease Control and Prevention.
The first case in this outbreak has been traced to an international traveler to Clark County who had contact with community groups with low vaccination rates, Wiesman said. Washington Department of Health officials identified 11 health care facilities, 13 schools and child-care centers and over 100 public places, including stores, where people may have been exposed to the virus, he said.
"We continue to have new cases occurring every week and almost by the day," Wiesman said. "We are fully expecting more counties to have cases, as well."
To contain the spread of infection, a state of emergency has been declared in Washington, where resources have been pulled from other public health services, such as visiting nurse programs.
State health officials from Washington, California and New York spoke Wednesday of recent and previous measles outbreaks on a call organized by the Association of State and Territorial Health Officials.
New York is also experiencing a measles outbreak within observant Jewish communities and stemming from travel to Israel.
There have been 209 cases there since October, according to New York State Department of Health: 64 cases in Brooklyn and 145 cases in Orange and Rockland counties.
Dr. Howard Zucker, the state commissioner of health, said five patients were hospitalized, including one in the ICU, though all have gone home now. An additional case has been reported in an observant community in neighboring New Jersey.
As a result of this outbreak, more than 6,000 unvaccinated children have been excluded from schools for over two months, Zucker said. Public health officials have spoken with parents, pediatricians and rabbinical leaders both in the United States and Israel to discuss the issue and promote vaccination.
"Over 14,000 children [were] vaccinated as a result of getting this message out," Zucker said, acknowledging that although there may be a "lot of reasons why people don't vaccinate," sometimes, it's just parents "being on the lackadaisical side" and not getting their kids shots in time.
Vaccination rates are low in certain communities, with as few as 60% of children having been vaccinated, but the state overall has a vaccination rate of 96%, Zucker said.
The measles vaccine -- known as the MMR or measles, mumps and rubella vaccine -- is very effective. One dose is about 93% effective at preventing the contagious disease if you come into contact with the virus. Two doses are about 97% effective. It is recommended that children receive the vaccine in two doses: the first between the ages of 12 months and 15 months and the second between the ages of 4 and 6 years old.
Dr. Karen Smith, director and state public health officer with the California Department of Public Health, recalled an outbreak that began in Disneyland in January 2015.
Her state tallied 136 cases linked to the outbreak, with 20% requiring hospitalization. "We were able to contain the outbreak within two months," Smith said, adding that the total costs, excluding treatment expenses, topped $4 million.
Smith also noted a silver lining to this cloud. As a result of the outbreak, SB277, a law restricting vaccine exemptions to medical indications for children who attend schools, was ultimately mandated. Vaccination rates rose 4.7%, and as of the 2018 school year, the rate is over 95% vaccinated children in the state, Smith said.
Get CNN Health's weekly newsletter

Sign up here to get The Results Are In with Dr. Sanjay Gupta every Tuesday from the CNN Health team.

High fever, rash all over the body, stuffy nose and reddened eyes are typical measles symptoms, which usually disappear without treatment within two or three weeks.
Wiesman explained that measles can be infectious in a window of four days before and four days after rash appears for a total period of up to 21 days. Worse, the contagion can linger in a room for up to two hours after an infected person leaves, so someone unvaccinated can become infected.
In 2019, nine states have reported cases of measles, according to information from the US Centers for Disease Control and Prevention and state health departments: Washington, Hawaii, Oregon, New York, Pennsylvania, Connecticut, Colorado, California and Georgia.
Wiesman said his state typically sees five cases of measles a year when there is not an outbreak.
"It's pretty simple: You prevent measles outbreak by getting the measles vaccine," he said, adding that parents who are hesitant should take questions to their health care provider.
https://www.cnn.com/2019/01/30/health/measles-outbreak-new-york-washington-update-bn/index.html Source: CNN
Print