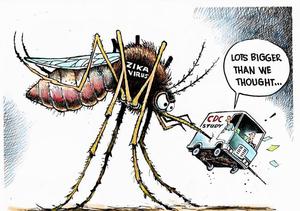 Since 2015, California has seen many travel-related Zika virus cases, and as the population of mosquitos that spread the virus continue to expand across the state, there is a significant risk for new Zika cases, according to results published in Emerging Infectious Diseases.

The Zika outbreak was first reported in Brazil in 2015, and numerous travel-related cases have since been reported in the United States.

This study included reported cases of travel-associated Zika cases California from November 2015 to September 2017 (N=588), including 139 infections in pregnant women, 10 congenital infections, and 8 sexually transmitted infections. The researchers recorded data on sex, age, race/ethnicity, country where exposure likely took place, duration of travel, symptoms, symptom onset date, pregnancy status, and outcomes. For all cases where patients had a travel duration of <6 months, the researchers compared the duration of time in Zika-infected areas between pregnant patients and all other patients using the Kruskal-Wallis test for 2 groups to retrospectively assess time at risk.

Of the 570 participants who traveled outside of California, 13.9% (n=79) were in their country of exposure for ≥6 months. Among patients who were in the country of exposure for <6 months, women who were pregnant at time of diagnosis had a significantly longer travel duration (median 14 days [range 1-153 days]) compared with all other Zika case-patients (median 11 days [range 1-137 days]; P=.03).

"There is still a risk for pregnant women and all those who travel to these countries, and it is necessary that prevention messaging remains targeted and operative," the researchers wrote. "Healthcare providers should continue to be suspicious of returning travelers with rash, fever, conjunctivitis, or arthralgia, particularly when other diagnoses have been ruled out."