The Board will consider a proposed assessment for mosquito surveillance and control by the Compton Creek Mosquito Abatement District.

In honor of World Mosquito Day, observed annually on August 20, the Compton Creek Mosquito Abatement District (CCMAD) is working to increase awareness of the importance of mosquito control.

West Nile virus is transmitted to humans and animals by the bite of an infected mosquito. As of July 9, WNV has been detected in 45 dead birds from 6 counties and 177 mosquito samples from 13 counties.

West Nile virus is influenced by many factors, including climate, the number and types of birds and mosquitoes in an area, and the level of WNV immunity in birds. The risk of serious illness to most people is low. However, some individuals – less than one percent – can develop serious neurologic illnesses such as encephalitis or meningitis.

We are excited to share that mosquito districts across the state have worked together to support the Mosquito and Vector Control Association of California to secure annual funding for CalSurv - a mosquito and mosquito disease tracking tool.

In many parts of the world, mosquitoes are a common summertime nuisance. But in places on the front lines of climate change, these disease-spreading insects may one day be a year-round problem, according to new research from the University of Florida.

"In tropical regions, mosquitoes are active all year, but that isn't the case for the rest of the world. Outside of the tropics, winter temperatures cause mosquitoes to go into a kind of hibernation called diapause. We call these mosquitoes 'cold bounded' because their activity is limited by these lower temperatures," said Brett Scheffers, senior author of the study and an assistant professor in the UF/IFAS wildlife ecology and conservation department.

"We found that the mosquitoes in our study are what we call 'plastic,' meaning that, like a rubber band, the range of temperatures they can tolerate stretches and contracts at different times of year," Scheffers said. "That tells us that as climate change makes our autumns and winters warmer, mosquitoes in more temperate regions are well prepared to be active during those times."

Infecting mosquitoes with a specific species of bacteria can shield them from dengue viruses, and as the bacteria spread to more mosquitoes, fewer and fewer can transmit dengue to humans.

Developed by the nonprofit World Mosquito Program (WMP), this breakthrough strategy to prevent dengue fever just passed a large clinical trial in Yogyakarta, Indonesia, The Atlantic reported. The trial showed how infecting mosquitoes with Wolbachia bacteria could reduce the incidence of dengue fever by about 77% in treated regions of the city, according to a report published Thursday (June 10) in The New England Journal of Medicine.

The first indication of West Nile virus circulating in Los Angeles County in 2021 was detected in a dead crow collected in South Pasadena. West Nile virus (WNV) is spread to people through mosquito bites. Birds can become sick from WNV, but do not spread the virus directly to people.

Follow these tips to protect yourself and your loved ones:
- Tip out stagnant water around the home weekly.
- Toss unused containers that can hold stagnant water.
- Check window and door screens around your home for holes.
- Protect against bites by using insect repellent containing any one of the following CDC-recommended ingredients: Picaridin, DEET, oil of lemon eucalyptus (or PMD), or IR3535.

West Nile Virus continues to pop up in California. This time, a mosquito testing positive has shown in Bakersfield, CA.

It's important to remember that most people infected with the virus will suffer mild symptoms or no symptoms at all. Up to 20% of those who become infected can experience fever, headache, body aches, joint pain, nausea, vomiting and possibly a skin rash.

August 20th is World Mosquito Day! Join us in squashing the most world's most dangerous insect! 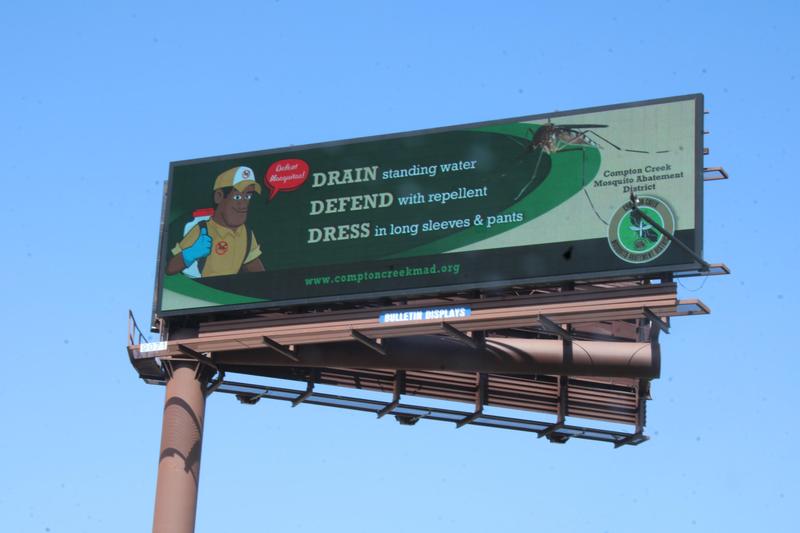 Have you seen our new billboard while driving on Highway 91? It shares some of the important tips to stay safe and protect yourself from mosquitoes.